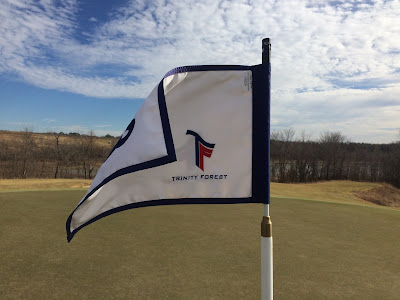 At the end of 2016 when I played Trinity Forest, it was as new as you could get, having only opened in October of that year, and I had no idea what to expect. What I found was a fantastic inland links course that marries the best of Sand Hills and Ballyneal and birthed a challenging and super fun course.

*Apologies in advance for only a few photos appearing of the course, both of my cameras went to the great beyond during this round so you may have to use your imagination for some of this.*

The front 9 (which may become the back 9 for tournament play) is a rock n rolling start to the course. Undulations abound on the fairways and on the greens. Often, I felt the greens were really oceans on a windy day. The tee boxes of TF are VERY similar to the style employed by Doak in Ballyneal, namely, the tee box is one continuous grassed area where tees can be easily set in interesting configurations each day.

Hole 1 featuring plenty of fairway but with bunkers camouflaging the best route turning it into a blind tee shot that you can still see. This is emblematic of the course in general, C&C seem to have gone to town on Alister MacKenzie's philosophy of putting danger out in front of you but upon arriving at the danger, you realize it wasn't so dangerous. 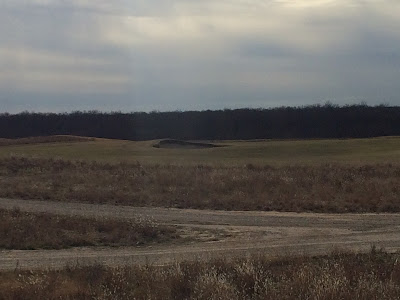 A classic example of this is Hole 2, a par 5, which has a bunker that appears next to the green and for certain will gobble up your second shot but instead is some 80 yards from the green and does not put your shot into too much trouble. Hole 2 also features a double green and while the best play is straightforward, another way to attack the hole is to hook it left then pitch it across the green. 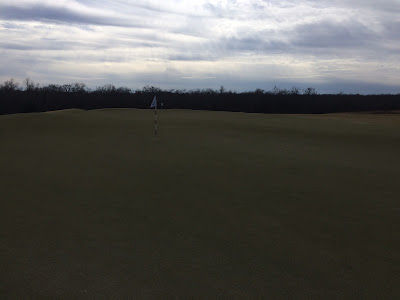 Perhaps my favorite hole on the course came early on in the round, the par 5 Fifth Hole. 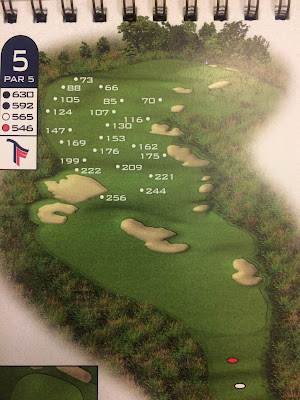 You have a wide fairway but it is uphill and with the crest of the hill and a bunker blocking your view, you aren't quite sure how your shot will end up. After the tee shot, it is ANOTHER blind shot, this time downhill, to a green that you can just see the flagstick. The green has a tendency to run from front to back so if you hit it midgreen or to the right, you might be rolling off. This hold might sound like a nightmare but it is a heck of a lot of fun and not so challenging that you feel like you are hitting and praying. 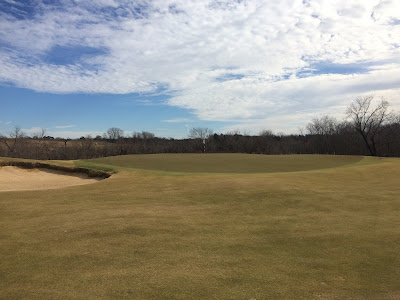 The greens on this course were very hard. Everyone and their mother recommended hitting it 5 yards short (where appropriate) and having it bound up the green. It also seems that there was 25% of the green that had a sever slope that took you off the green. For example, Hole 3 is straightforward par 3 over a creek and if you hit it on the middle left portion of the green, it is going to funnel off into a bunker. It will be fascinating to see how the pros handle this course in 2018 at the Byron Nelson.

The most controversial green on the course is Hole 8. 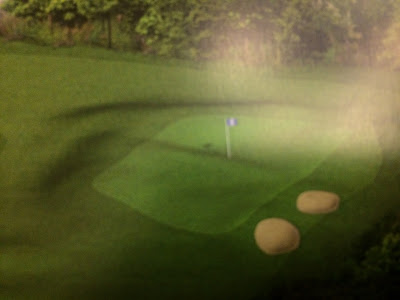 It is a longish par 3 that encourages the player to hit a high fade. There is a HUGE hill in the middle (if you can make that out from the picture above) and if you are one side the hill, it might take you two shots to get over to the other side. I hit a great shot, it rolled onto the green and almost off but many of the greens have a slight clamshell bank to them so it rolled back on but it still took me 3 putts from 50 feet for a bogey.

While the tee boxes and the green playability reminded me of Ballyneal, the bunkers were pure Sand Hills. Huge, gaping maws of earth threatening to gobble up any balls. Plus the sand is deep and lush so if you go into a bunker, your ball might be 3-4 inches below the sand line. 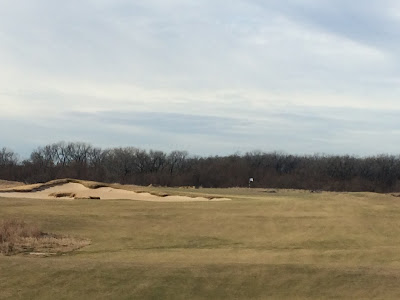 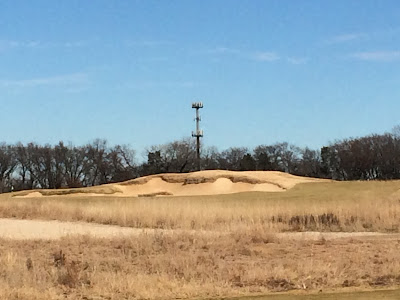 The picture above is of Hole 14, one of the most fun holes on the course. A par 4, playing 265 from the white tees but the bunker takes up all your psychological space. Driving the green, as I did, is no picnic either as the slopes are severe all around the green so if you miss the green, there is no guarantee of an up and down for a birdie.

The back 9 is slightly flatter and more shelf-y than the front side. You aren't necessarily in jail if you miss the fairway shelves but they clearly shape how to play the holes. For the most part though, you are going over flat terrain although eventually you do join up to the double green thus introducing you to the guys going off the front side. 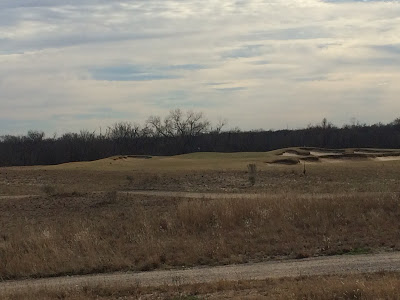 Perhaps the best back-to-back holes on the back are 15, a long par 4, and 16, a short par 5, each requiring the same type of drives (a slight draw) and then wildly different approach shots and green complexes.

I played from the whites and while a reasonable distance for most, it seemed like I was using a lot of long irons into greens based on the wind and the slope of the fairways. Yet with the par 5s, I felt I had a chance to get on in two on most of those holes.

As you can probably guess from the pictures, the course is really linksy. Trees almost never come into play unless you are WAY off line. The really challenge lies in the rough and the almost desert-like scrub brush on either side of the fairways. If you go offline, you still have a chance to advance the ball forward.

Additionally, I was a huge fan of the grasses the course used. Their use of zoysia grass was a brilliant choice and considering how good the conditions were with dormant grass in the winter, I can't wait to see the course when it greens up in the summer. The course is like a tank, built to last.

C&C even built something I haven't seen before, an homage to the postage stamped green at Troon. 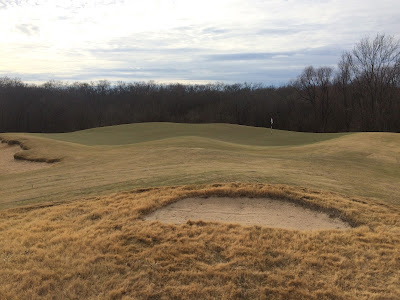 This hole was only 110 yards and a whole lot of fun. I mean, look at that, two separate bowls with a ridge running through the middle and clamshells on the outer edges of the bowl. This was the only birdie of the day for me and I loved every moment of it.

Playing up 18, a long par 4 (most of the par 4s on the back are long in contrast to the shorter par 5s and shorter par 3s), it was clear to me that the nines could be switched to great effect and there is some talk in the air of doing just that, especially given the placement of the under-construction clubhouse.

As I finished up my round, I got a very Erin Hills vibe to the landscape and with TF's expressed intent to bring championships to the Dallas-area, I suspect this might be the course to do it. Add to that the IMPRESSIVE practice facilities, short course 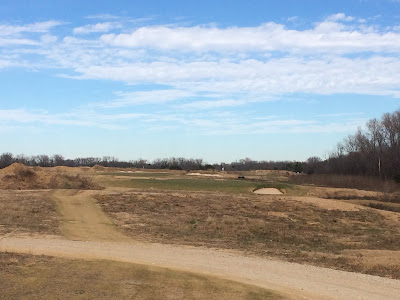 First Tee association and a host of other practice apparatuses being built, either a championship will be hosted here or the next great golf champion will train here, for that I have no doubt.

Overall, this course greatly exceeded my expectations and is firmly in the top 10 of courses I have played. It is tough but scoreable, challenging yet fun. All it needs is to be next to the sea and it would be perfect for me but alas I will have to keep coming to Texas to play it (not a bad thing!).

For more information on Trinity Forest, check out this link! https://trinityforestgc.com/ 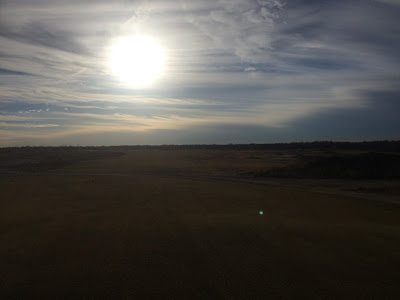 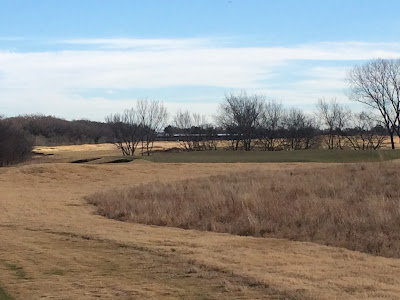